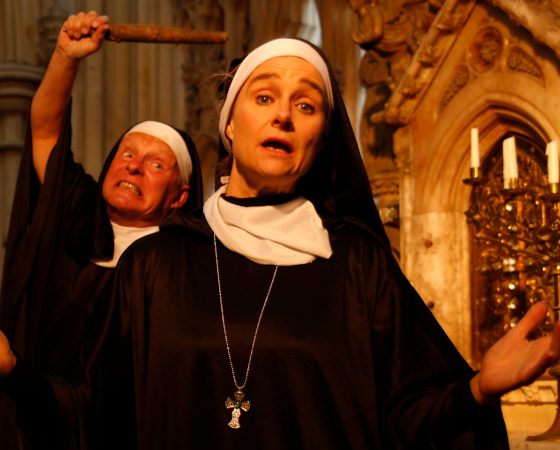 There will be cash bar and a raffle on the night.

Buy your tickets HERE!
(Maximum of 10 per table if booking as a group.)

Khushi Feet cordially invites you to our most extravagant murder mystery dining experience yet, featuring live actors and an international brass band . . . in the grounds of Canterbury Cathedral!

It’s November 1942. When a nun dies in mysterious circumstances in the Cathedral, the local police are called in to help solve the crime. And they need your help!

Join 368 Theatre Company in the latest episode of The Morlington Mysteries – the UK’s only murder mystery soap opera – and win your team a bottle of bubbly.

About 368 Theatre Company
368 is a professional theatre company that has been performing murder mystery events since 1996, in a variety of venues, including restaurants, pubs, theatres, village halls, hotels, castles, at private dinner parties, on a steam train and at Arundel Jailhouse. They present a new murder every month, all set in the same Cornish village, forming a ‘murder mystery soap opera’.

The mysteries are written by Brighton-based actor and writer Nigel Fairs, whose stage and screen work has included everything from EastEnders to The Mousetrap in the West End. Recently he has been seen in Unforgotten (ITV), Silent Witness (BBC) and Translations (National Theatre). His eight-part murder mystery serial, Shilling & Sixpence Investigate (starring Celia Imrie and David Warner) is now available from Audible.